So I’ve been thinking a lot about failure and what I consider a #fail.

With all the beautiful crafts, decorations, cookies, and homemade this and thats, it’s easy to get sucked in and feel like, “Why do I even bother?”

But here’s why you bother: Because doing the thing is more important than the thing itself.

We should celebrate our fails because it means we’re out there doing things!

I mean, picking out the perfect dress to wear, days of talking about “Ho Ho,” standing in line for over an hour, and then having Ruby lose it completely when she sat on his lap is quite possibly my favorite fail of the year!

Another recent and less hilarious fail was just the other day on my birthday.

I used a Martha Stewart recipe which was a little intimidating to begin with. Then I said to my husband,

“We only have whole wheat flour, do you think that matters?”

Questioning the validity of an ingredient while baking is probably not a good sign.

We rolled out the dough, and Ruby helped cut them out. We put some sprinkles on them and popped them in the oven. When we tasted them, my husband said,

“They’d be good with coffee.”

Translation: They were hard as rocks.

Maybe it was the flour. Maybe I rolled them too thin. Maybe I baked them too long. Whatever. It was a fun activity that we did on my birthday while it was snowing. Ruby loved watching them bake. And, let’s be honest; she still liked eating them because she still devours pouches of pureed broccoli mixed with spinach and peas, so the bar is set pretty low for her.

The point is, it’s not about the cookies. It’s about the memories.

As an art teacher, I would constantly have to talk kids into letting go of the fear of failing and just start. The process of making the art was more important than the artwork itself. One of my catchphrases was…

“The beauty is in the imperfections.”

Now, as a mom, I find myself needing that pep talk almost daily. And I know I sound like a cheesy poster you could buy at the teacher store, or maybe Yoda, but the only real fail is not trying.

Alright, technically, this post is over. But as I was uploading that photo of my cookies up there, something occurred to me. They look pretty cute in the photo. I could have posted just that to social media and people would be thinking I nailed it.

Sometimes when I think other people are nailing it, I somehow start feeling like I’m not. I bet there are definitely some people posting photos of some hard, practically inedible cookies out there and we’re none the wiser. Don’t let it get ya down. 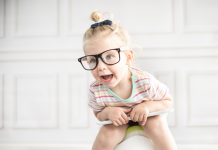